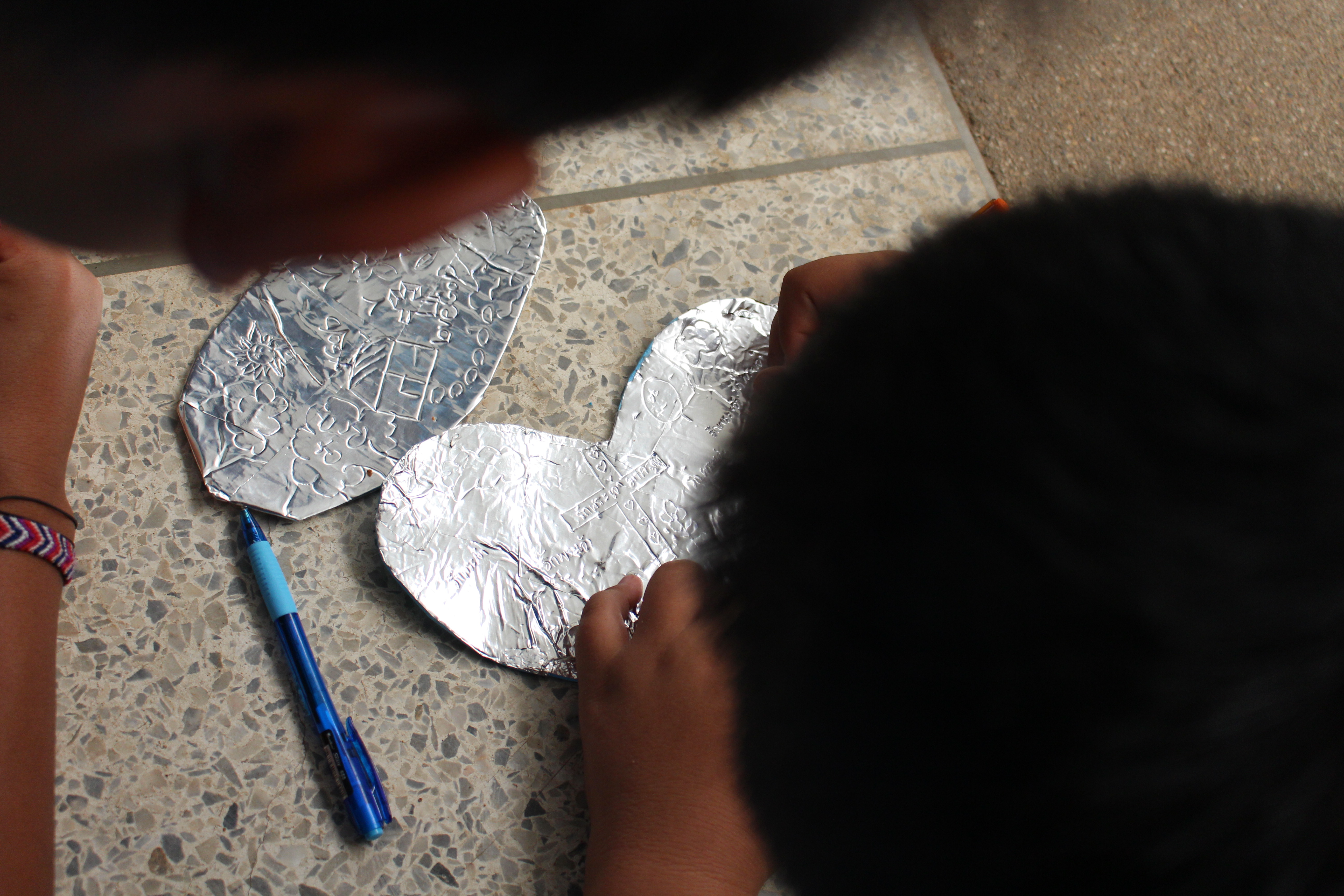 Traci shares about the mission trip she led to the House of Blessing in March.

M to M (which stood for the name of our town to the name of their town), a team of 6 teens and 4 adults, travelled to Mae Sai, Thailand from March 23-April 5.  One day of orientation had a significant impact on us as we learned about the work of GNI, trained for spiritual battle and closed with a time of listening prayer for everyone.  This encouraged the individual and helped us as a team learn to view each other through God’s eyes.

Sunday, March 25-27, we flew from Vancouver to Bangkok, Thailand.  After a day of rest we made our way to the House of Blessing (HOB).

We arrived at HOB just in time for supper, immediately experiencing the respect within the culture as they served us.  It wasn’t long before Josh, Julie and Amber were soon teaching HOB kids phrases in English so that we could converse.  Throughout the week, the HOB kids learned English and we learned Thai until there wasn’t much of a language barrier.  Love is the same in any language.

After supper, we played a bunch of ice breakers and then worshipped God together, each in our own language but singing the same song.  It was a taste of heaven!

Thursday morning, we got to be tourists, taking in the outdoor market and touring the Golden Triangle, an area along the river where Thailand, Myanmar and Laos all come together.  This is also a main source area of human trafficking in the world today.

In this area, you can also see how Buddhism, the main religion in Thailand pervades the culture.  Besides a large statue of Buddha, there was a spirit house, which were also seen at most businesses, houses, and wats (temples).  Every day, believers left food, water and other objects to please the spirits.  Buddhists try very hard to please the spirits and to do more good deeds than bad deeds so that they can come back as something better after they die and are reincarnated.  The spirit world is very real to Buddhists.

Next, our travels took us to the farmland that had been purchased for HOB’s future growth.  Soon they can begin to build a girls’ residence, boys’ residence, cafeteria and meeting room and a house for Josh and Julie.  Their dream is to be more self-sustaining, so they showed us where they will raise pigs and chickens, have a fish pond and grow vegetables.

Back at the house, we baked cookies with the kids and taught an English lesson, complete with games.  The evening was another opportunity to worship and share testimonies about our lives.  By 9:00, we were all ready for bed, with Amber hosting the girls and the boys staying at the office.  We were treated to air-conditioned bedrooms, while otherwise enjoying the +35 degree weather outside.  It was great to experience life as the Thai live.

The Christian kids ministry outreaches into three villages or neighborhoods were a real highlight for most of us.  The HOB kids are not scared to help take leadership roles and minister to their peers.  They pray over the kids and listen to what God says to them.  A 16-year-old girl from HOB, teaches the Word of God with passion, clarity and no notes.  During a typical outreach, we started with games in which we taught some basic English.  Then we sang a Christian song, complete with actions, in English, Thai and English again.  Someone shared a testimony and then we shared a couple mimes.  The mimes were about the Easter story, salvation, and the way to get to heaven.  Other mimes were about not succumbing to peer pressure or about the masks we wear with each other, but that God invites us to take off in order to be ourselves.  The HOB kids taught the Word and shared a memory verse and Josh asked for those who wanted to accept Christ to come forward and we prayed for them.  We also prayed for those who had accepted Christ before but weren’t sure of their salvation.  After the team and HOB kids surrounded those who had come forward to pray over them, the children were given time to share if they had heard anything from God.  Sometimes this gave time for correction like when one young child shared that God told him that God would no longer help him or forgive him if he sinned again.  Other times, the child would share how they had heard God say they were redeemed.  Others might share a vision of a bright light in a church and how they prayed their village would come to Christ.  We ended with a craft, which was another time to connect with the kids.  Our teens commented how we were only in these villages a couple hours and yet the kids all accepted them and played with them.

Our group had the opportunity to go to the village I had been in last year with the Mother’s Heart team.  Many of the girls from HOB come from this village.  Many parents here struggle with addictions or abuse and it is our desire to see Christ transform this village.  He has begun his work in the children.  Our team met the first Christian in that village, a young girl who always comes with her Bible and notebook.

Another village that we had the opportunity to go to was one that is new to the HOB.  It is a strong Buddhist village and many kids wear amulets around their neck.  And yet, God has opened the door for HOB to come and share the gospel and walk alongside of these people.  In this village, many of the adults, parents and grandparents, also come and sit on the sidelines to watch and listen.  I had been taking pictures during the outreach and then I stopped and prayed for these children and adults.  I prayed for continued favor with these people so God’s message could go out.  It is one thing to share the Christmas story but the Easter story can be so hard for others to accept that there is one way to heaven.  Christianity is so foreign to Buddhists and yet, there the men sat with smiles stretched from ear to ear as the gospel was shared.  When the altar call came, the majority of kids flocked to the front to accept Christ.  Yes, it will take time to disciple the villagers and share that God is not to be added to their beliefs but rather He is the only way.  Pray that the door remains open and that they are willing to hear.

Other activities with HOB during those days included making shrinky dinks, playing “football” and going to a Korean BBQ restaurant.  There was a small round BBQ on each table of 4 people.  The Thai helped us cook and offered all kinds of meat, seafood, veggies and items we couldn’t name, all of which we willingly tried.  The ice cream at the end was a hit!

HOB had asked one of us to preach during the church service.  One of the teens in our group, was excited to take up the challenge and he preached on the topic of “Forgiveness Based on Unconditional Love.”  Perhaps he has the gift of a preaching?

Sunday afternoon we found a delightful way to cool off as they took us to their swimming hole where we played for hours.  Afterwards we had a scavenger hunt and awarded Canadian candy. Many laughs were had as the Thai tasted the sour patch kids candy and puckered up!

Monday it was hard to say good-bye to our new friends that had become so dear to our hearts.  With hugs, tears and promises to write, we loaded into the vehicles for the quiet ride to the airport, each secretly planning their way back to Thailand.  After flying to Bangkok, we drove to a resort with a lovely pool for our time of debrief.

What kind of impact did all of this have on our team?  We all met God personally.  Many want to do daily devotions, some involving their family and others studying the Word in a deeper way or beginning to memorize Scripture.  Some have felt the call to missions and have begun to rethink career options.  Others have noticed a subtle shift in the way they view others.  They no longer judge the people around them but look at them through God’s eyes.  A teen wants to start a teen worship band at church.  Adults want to develop leadership in the youth.  One, who doesn’t fluctuate much in his emotions, realized that he can feel deeply as one of the children at HOB wormed into his heart.  Some have felt the spiritual battle upon returning home and have heard God faithfully speak to them.

As for me, I have been flooded with joy.  Last year, at the end of my trip to Thailand, I wanted to teach the youth I work with about listening prayer.  My second desire was to take my family and youth to Thailand.  God fulfilled both prayers within the last year.  It was excellent to also see the spiritual growth in the HOB kids since last year.  I think of III John 1:4 which says, “I have no greater joy than to hear that my children are walking in the truth.”  My heart is full.