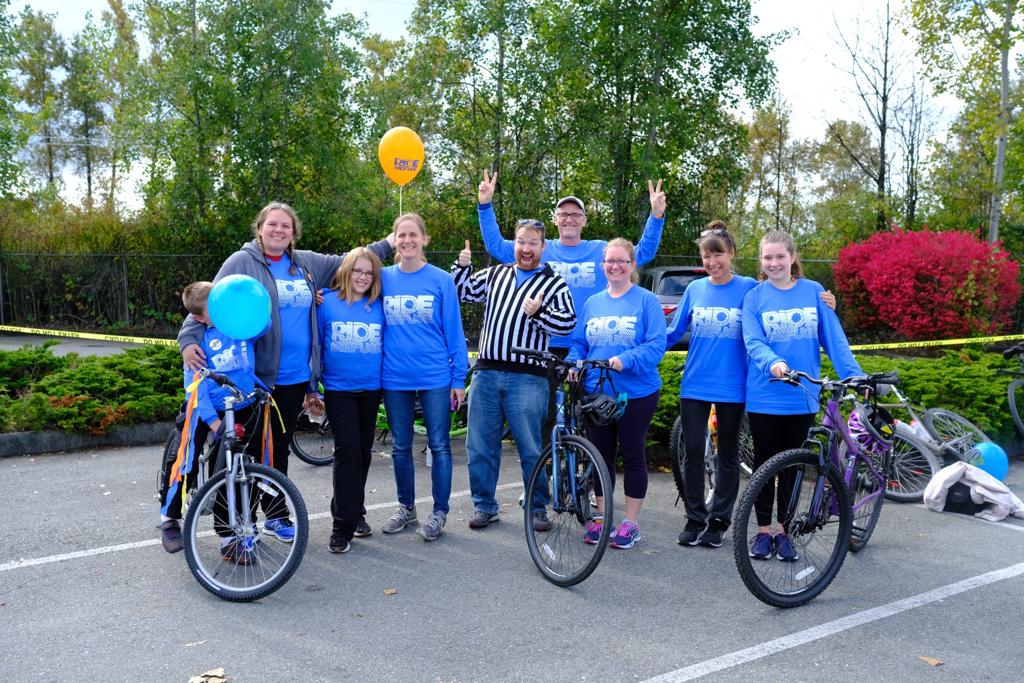 The morning of Saturday, October 5, was 5*C and rainy.  “What a nice day for a walk!”  While that might not have been your first thought, that is what Traci Johnston and over 500 others chose to do in the Ride for Refuge in Winnipeg.  By the time the bike ride/walk started, it was 15* but most were sporting rain gear or carried umbrellas.  Some were enthusiastic and even biked 50 km, although one such gentleman was chilled to the bone by the end since he was soaking wet.  However, spirits were not dampened as everyone was celebrating the funds raised for the charities they were passionate about.  There was an atmosphere of unity as 28 charities came together for a common goal of cheering each other on in the work they do for protecting others.  Participants were treated to a lunch afterwards and Winnipeg Police Cadets mingled as they had provided traffic detail for the event.

Another team rode in Golden, BC, where it was chilly but Mom and daughters were enthusiastic to end trafficking and to provide rescue for those who had a dismal future working in the opium fields. It was so good to see them all power through the beautiful trails and come out victors, having accomplished their goal in riding and fundraising for a worthy cause.

Several teams rode in Cloverdale, BC, some walking 5km while others rode their bikes 10-110km! Rob, Judy and Amber Griffioen were all part of the celebration and were impressed with the organization, snacks and rest stops as well as the great lunch afterwards.

Thanks to all who supported Good News International! Without your support, it would have been just another walk or bike ride. Instead, 20 participants making up 6 teams in 3 locations, raised a total of $8,780! This provides complete yearly support for five children in Myanmar. We are encouraged and excited to watch this grow in the coming years. Thanks for being on our team!